My first press was very crude, using cardboard layers to bend the boards into concave shapes. I eventually stopped using plywood and started buying hard rock maple veneer and a vacuum bag  to laminate the layers together. The bag was slow and unreliable, and after waking up to one too many overnight leaks, I decided to step it up.

I was able to build the 400lb beast pictured below for only $80, using scrap steel and recruited labor from my high school's welding class.  Inside of the press, a large air bladder inflates to push the layers of wood against a mold.  I got several quotes for a custom bladder all for well over $1000, so I decided to make my own. I searched around for 12" firehose as that seemed to be the material of choice for the ski builders who usually make these presses.  Eventually I found a company willing to sell me five feet of heavy duty hose used in fracking operations. This allowed me to press the boards at over 50 psi, giving over 29,000 lbs of force over the area of the wood.

For the wood I used 1/16" hard rock maple veneer, usually 7 plies with two of them being cross-grain. I used titebond III spread with a paint roller, front and back on each ply, which had to be done in 5 minutes or less or the glue would become too tacky to position correctly. At first I struggled to get it in the press in under 7 minutes, but by the end of my career I was getting two boards in at a time with a minute to spare.

I used the quick simulation in solidworks to design the mold so that it was stiff in the very center but gradually gave out evenly as it went toward the trucks.  This made the boards feel stiffer and more controllable while retaining the smoothness of a flexible board. I made the mold out of MDF sheets laminated together, CNC'd by a guy in Delano, MN.

The extra room seen in the press taken up by the 2x4s was to accommodate larger molds. I made a concrete mold at one point using a blank Churchill deck and chicken wire rebar. This worked very well but weighed over 100lbs and was 8 inches thick, so I only used it when I needed it. The board had very large kicktails on either end as well as flared wheel wells that can be seen in the "superman" board. 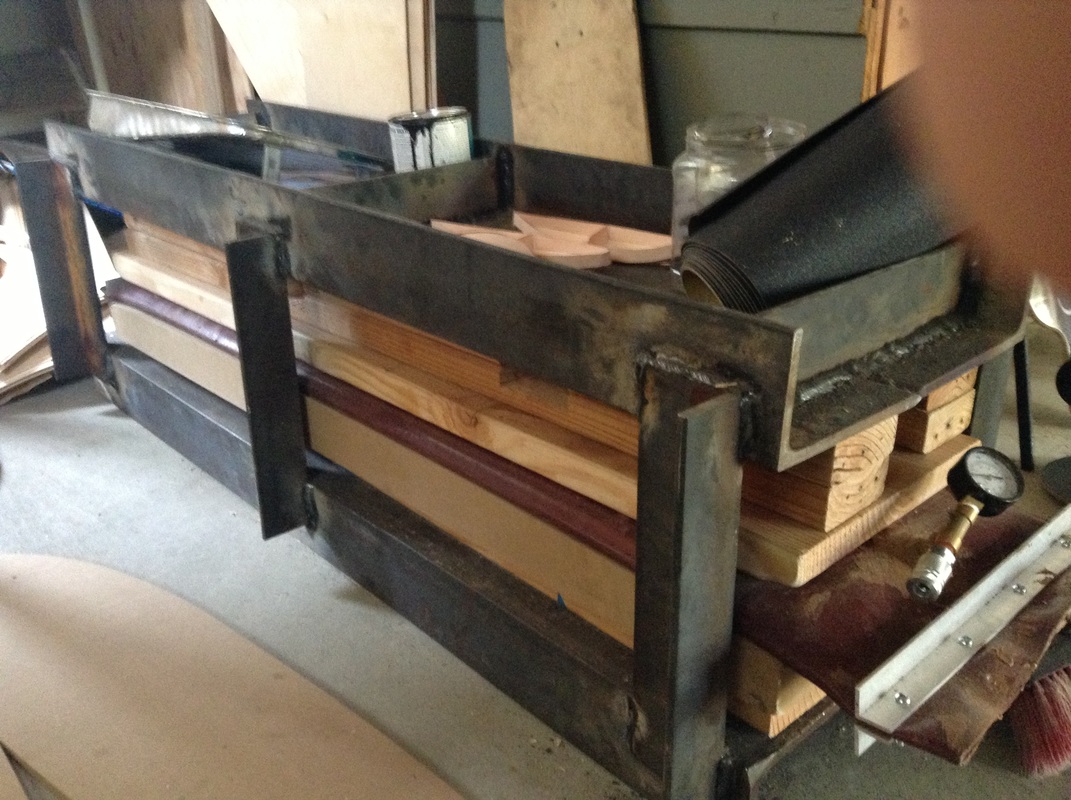