Sam Schmitz
"The Past is our Present, is our Future"

On April 29th 2016, the University of Minnesota held a TEDx event in the Northrop auditorium, and the crowd was three times larger than the year before. Hundreds came out to see the talks themed "Reawaken," and Design U was in charge of the stage and exhibit design.

We integrated this into our "intern program" where each group of interns was paired with an executive board member to create an exhibit in just under two months. After two interns dropped due to their course loads, the project was up to me and a very motivated young woman named Rachel Anderson. Rachel was a freshman in mechanical engineering who had no experience building things, but made up for it with passion and energy.

For some reason I had always wanted to build a huge model of the state of Minnesota. This lead to the idea I presented to Rachel at the kickoff meeting: We would build a large foam Minnesota with lights marking each of the largest cities in the state. Next to the state would be a projector that would show facts about the state by year, progressing from the first settlements to the present. The lights for each city would illuminate as the presentation passed the point in time that they were founded. By the end of the presentation, the state would be lit up brilliantly, with the screen displaying facts about the future and growth of Minnesota.

And this is exactly what we did. We ended up with 64 major cities, selected by population and historical significance. We used a projector to trace the state on 2" insulation foam (picture 1) and then made five copies, all on the same foam except one on a face piece of half inch foam.

On this half inch piece, marks were made and holes drilled in the location of each of the cities. I burned a channel where the wire sleeves would go and connected LEDs and resistors. One of the most exciting discoveries of this project was CAT5e cable- the same regular cable you would use to connect a router- is composed of 8 strands of solid 22 awg wire. The strands come twisted in pairs, one colored and one white for the ground. It was almost as if it was purpose built for this project!

I had originally intended to build a shift register to control all of the LEDs from a single controller, but with knockoff Arduinos being cheap I decided to just use two to power the lights. The power point was made by Rachel with the help of the U of M's History Club who we recruited to help with the facts.

Once the pieces were cut and it was wired up, it was simply a matter of putting it together with tons of construction adhesive, plaster, and finally a coat of maroon paint. 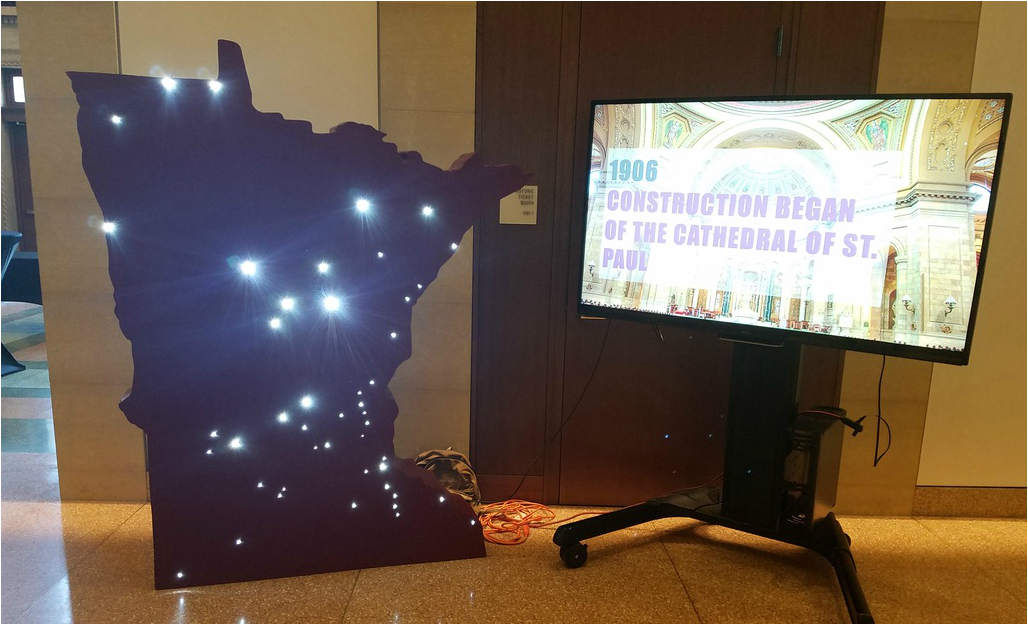 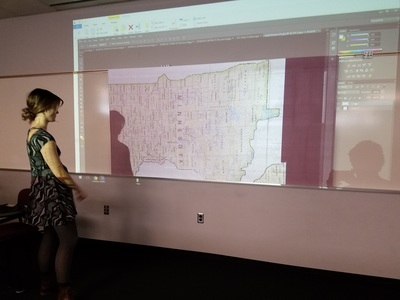 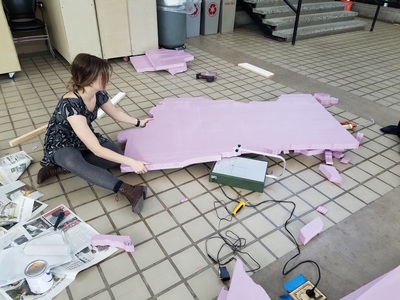 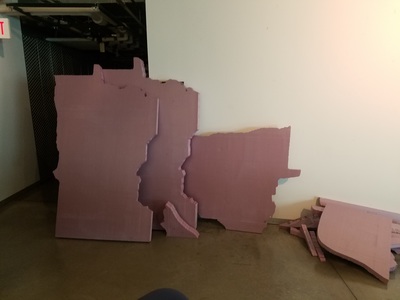 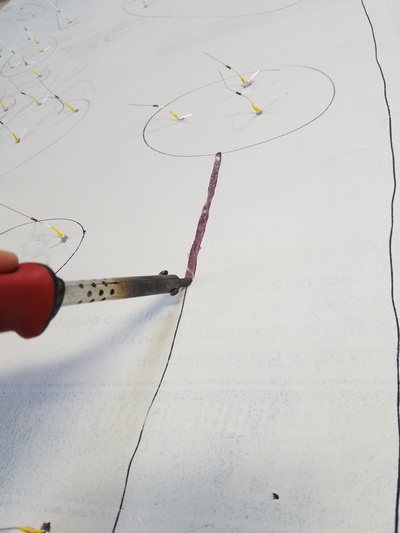 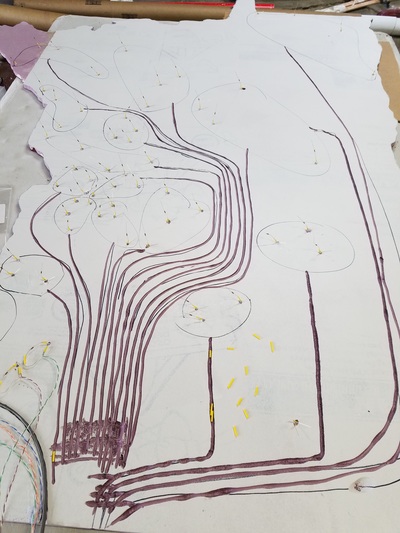 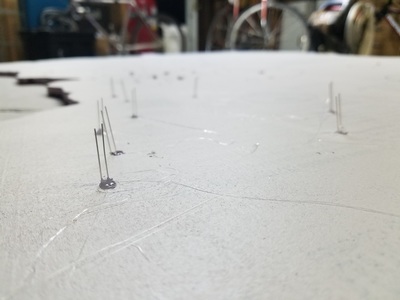 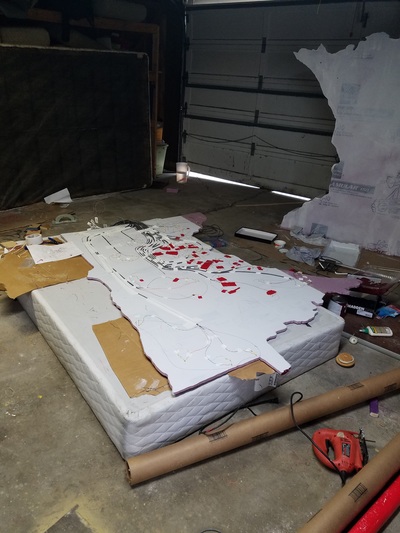 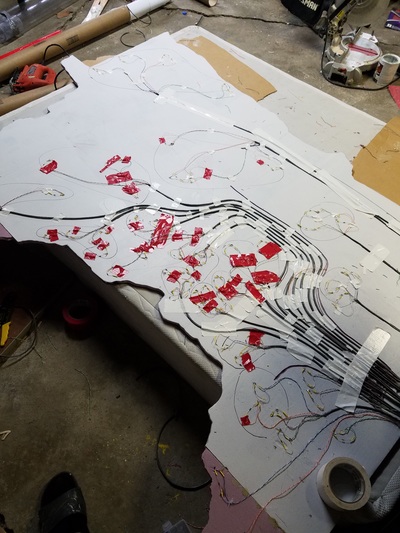 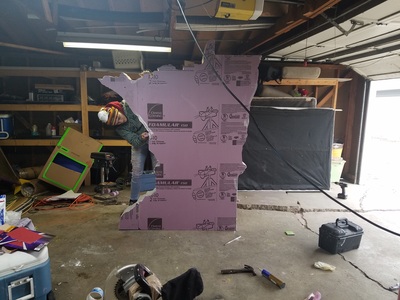 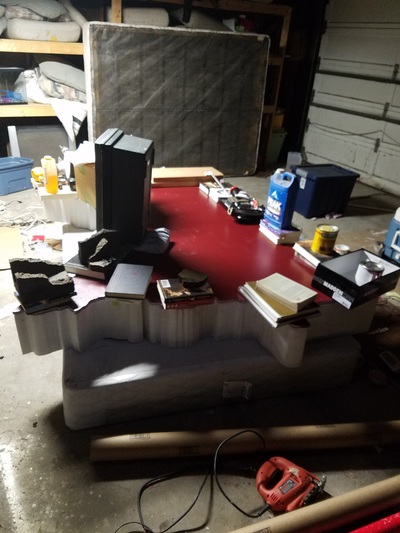 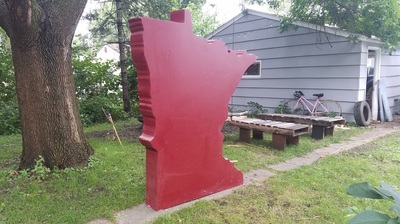 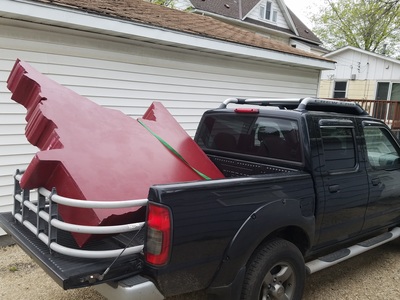